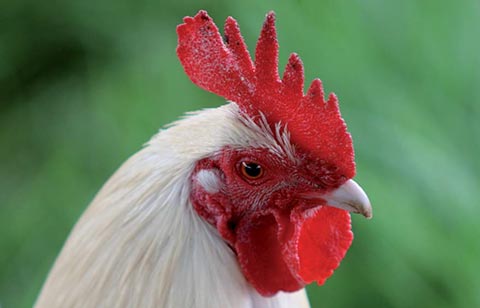 Broad-spectrum mycotoxin absorbent suitable for all types of feed.

Add to mixer with the other ingredients and mix homogenously.

Compatible with all types of feed ingredients. Does not affect or absorb any vitamins, minerals, coccidiostats, antibiotics or any other feed additive.

FARMA-BOND PLUS is a high affinity sorbent that vigorously binds aflatoxin and other mycotoxins in animal feeds. In its bound state the completed mycotoxin is no longer bio available and therefore will pass harmlessly through the animal’s gut with the excrement. Thus FARMABOND PLUS can be used to protect animals against the negative effects of aflatoxicosis or other mycotoxicoses when mixed in feeds contaminated with these harmful mycotoxins.
MAXIMISE RESULTS BY ELIMINATING THE ECONOMICALLY DAMAGING EFFECTS OF MYCOTOXIN MOULD

Adsorbs and retains the mycotoxins in vitro and in vivo at gastronintestinal  level and are excreted by way of the faeces. Mycotoxicity is eliminated or  diminished, allowing for better absorption of nutrients.
In vitro and in vivo studies have shown that it is capable of adsorption  of the following mycotoxins:

FARMA-BOND Plus is a high affinity sorbent that binds mycotoxins found  in feeds. In this bound form the harmful toxins pass through the alimentary  tract of the bird or animal to be voided in the faeces. FARMA-BOND Plus  thereby helps prevent the absorptions of mycotoxins into the body and so  protects the animal against their harmful, often fatal, effects.
FARMA-BOND Plus is not absorbed by the body, its action is purely  local and is a direct effect of its physical and electrical properties.  FARMA-BOND Plus traps afloxtoxins as a result of the electrostatic  attraction to aluminium ions, when mixed with water. It has an enormous  surface area so that it can act as a liner inside the intestine. Electronic  microscope pictures have shown the intestinal cells being covered by the  suspension. The electrical properties of FARMA-BOND Plus make it absorb  bacteria and toxins in the intestine so that they can be eliminated with the clay. 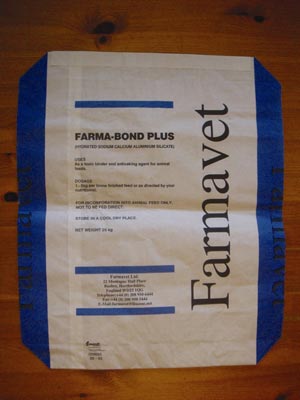 As a toxin binder and anti-caking agent for animal feeds.